Not only is Bush a dictator—he’s a dangerous one. Some of our allies see him as more dangerous than Kim Jong-il or Mahmoud Ahmadinejad. The Guardian reports: 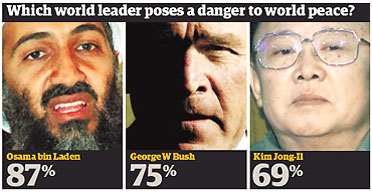 America is now seen as a threat to world peace by its closest neighbours and allies, according to an international survey of public opinion published today that reveals just how far the country’s reputation has fallen among former supporters since the invasion of Iraq.

Carried out as US voters prepare to go to the polls next week in an election dominated by the war, the research also shows that British voters see George Bush as a greater danger to world peace than either the North Korean leader, Kim Jong-il, or the Iranian president, Mahmoud Ahmadinejad. Both countries were once cited by the US president as part of an “axis of evil”, but it is Mr Bush who now alarms voters in countries with traditionally strong links to the US.

Finally, somebody who agrees…

4 Responses to “Bush the Dangerous Dictator”